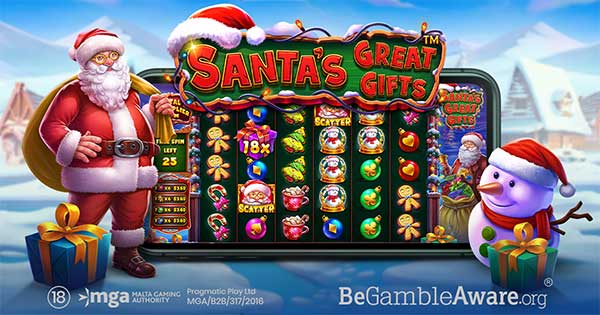 Set across 6×5 reels, the title has symbols depicting various Christmas staples including baubles, candy canes, snow globes and more. At least eight matching symbols need to be landed anywhere on the game board to trigger a win. This creates a tumble feature with new symbols taking the place of winning ones allowing for additional wins to be made thereafter.

During any spin, multiplier presents can randomly land on the game board, with a value from 2x to 100x attached. These are triggered when a tumbling sequence ends, at which point the values of all multipliers are added together and the total win gathered is multiplied by this amount.

Free spins are unlocked for landing at least four scatters with any additional awarding extra free spins up to a maximum of 20. Here, a progressive feature is active and starts at level one with multipliers mirroring the base game’s
value of 2x to 100x. The landing of numerous multipliers increases the minimum value of these up to 50x.

Santa’s Great Gifts™ follows in the footsteps of recent hits such as Snakes & Ladders 2 – Snake Eyes™, Gems of Serengeti™ and Shield of Sparta™, which reside among a collection of over 250 titles in Pragmatic Play’s award-winning games portfolio.

“The slot’s progressive features allow players to unlock multipliers in the free spins round and builds upon the fan favourite cluster style gameplay to deliver spirited festive cheer.”