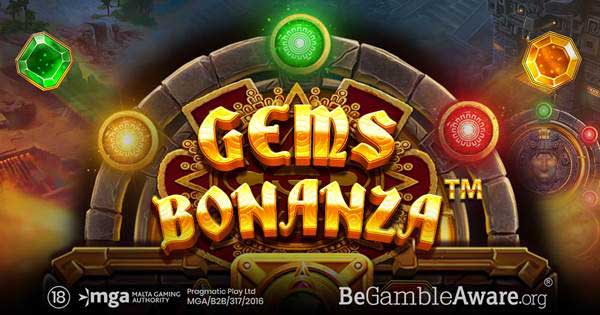 The 8×8 grid fills with symbols which, when connected in groups of five or more, pay out as a win before new symbols tumble from above. Random colour markings can land on any section of the reels, each with a feature attached.

Pink marks will turn a symbol into a Wild, while a brown mark awards squares, which turns random blocks of 2×2 into the same symbol, awarding instant wins. Red Marks turn a section of the map into a colossal symbol of up to 5×5 in size, while green marks will trigger lucky Wilds, adding up to 15 Wild symbols across the board.

The blue mark triggers the Nuclear feature, which, once all winning spins and tumbles have finished, clears the entire screen of symbols with an entirely new grid generated in their place.

As more wins occur on a single round, the Gold Fever feature is charged, which can activate all spin modifiers, and when fully charged, will award players a 10x multiplier.

Gems Bonanza is the latest addition to Pragmatic Play’s growing slot portfolio, following Return of the Dead and joins the company’s much-loved John Hunter series, as well as the multi-award-winning Wolf Gold.

Melissa Summerfield, Chief Commercial Officer at Pragmatic Play, said: “Gems Bonanza is a thrilling and unique addition to our slots portfolio, packed with features to keep any player engaged.

“With tumbling wins, every spin can lead to more wins, and with the nature of the Gold Fever feature, these wins can quickly increase in value exponentially. We’re delighted with Gems Bonanza and can’t wait to see how it is received by players.”

Pragmatic Play currently delivers up to five new slot titles a month, as well as an extensive range of Live Casino and Bingo products through its multi-vertical offering. The company’s entire portfolio is available through a single API integration.