Pragmatic Play visits the big smoke in Down the Rails 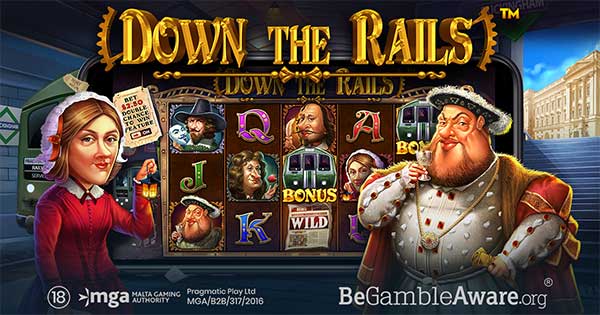 Pragmatic Play, a leading content provider to the iGaming industry, takes a tube trip through London in latest release, Down the Rails™.

Randomly during any base game spin, one of five features can be triggered, with each providing additional big win potential. These include; Tunnel Vision, which adds mystery symbols to the reels, The Big Smoke, adding one 3×3 colossal symbol to the game board, Wild Strike, bringing random wilds to the screen, Shifting Stack, awarding multiplier wild reels to the game, and Bonus Blitz, which increases the likelihood of landing the bonus game.

In addition to the multiple features and modifiers in base play, players can trigger one of five separate bonus rounds, or gamble their way up the ladder of more lucrative bonuses once the mode is triggered.

The bonuses take you across famous London destinations, while most lucrative of these features is found in the End Of The Line bonus, where three respins are awarded for each instant prize or game-altering symbol landed across an expandable 3×5 grid.

The release of Down the Rails™ follows hit games such as Hot To Burn Extreme™, Black Bull™ and Greedy Wolf™ which reside amongst a collection of over 200 titles in Pragmatic Play’s award-winning games portfolio.

Irina Cornides, Chief Operating Officer at Pragmatic Play, said:
“Producing feature-filled slots that our fans adore is always the driving force behind our game production and Down the Rails™ is filled with more features than perhaps any other release thus far.

“The game will have mechanics triggering throughout the base game and allows players to gamble their free spins in order to gain more lucrative rewards if they are feeling lucky. We are excited to see players’ reception to this London-inspired release and which bonus out of the five on offer will be their favourite.”