Push Gaming challenges players to a duel in Deadly 5 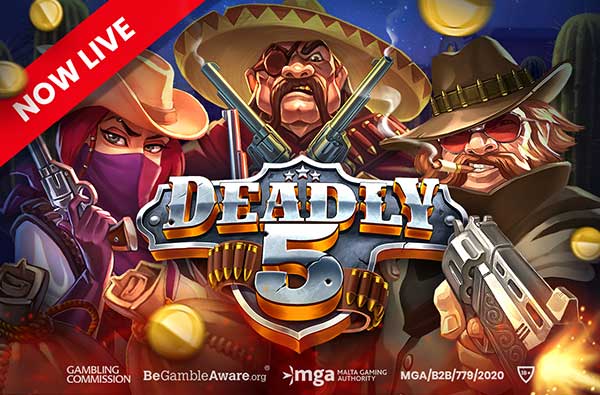 B2B gaming supplier Push Gaming has announced the network-wide release of Deadly 5, transporting players back to the American frontier on the hunt for the most fearsome cowboys.

This 5×4 reel 20 payline slot will be available to all partners across regulated markets and follows recent hit titles like Mad Cars and Fat Banker.

Players will be adventuring through the wild west in Deadly 5 hunting cowboys each with a bounty on their heads. This theme is mirrored by the slots symbols which consist of horseshoes, cowboy boots, pistols and the main criminal antagonists.

The base game is also home to a sheriff’s badge that represents the wild symbol within Deadly 5 substituting all symbols except the scatter, making it easier to create winning lines.

Landing at least three safe symbols, the scatters within this title, awards 10 free spins with additional scatters awarding more free spins. A sheriff wild reel is present on reel five throughout these spins with the player being tasked to match the outlaws to their respective wanted posters situated at the top of each reel. An expanding symbol feature will trigger from this with the potential to award huge wins.

Deadly 5’s medium volatility is in contrast to some of Push’s previous highly volatile releases such as Wild Swarm, Fat Banker and Jammin’ Jars and showcases the provider’s ability to create titles that offer a wide variety of mechanics that cater to its large player base across the globe.

Commenting on the release, James Marshall, CEO at Push Gaming said: “The wild west has a proven mass media appeal and adding our Push Gaming style to this popular theme has produced a title that is engaging, innovative and will be popular among both new and existing Push Gaming enthusiasts.”

“The ability to have multiple wild reels present within the bonus game can deliver huge win potential and these are awarded in an inventive mechanic requiring wanted posters to align with character symbols. I’m excited to see the reception Deadly 5 will receive from players.”