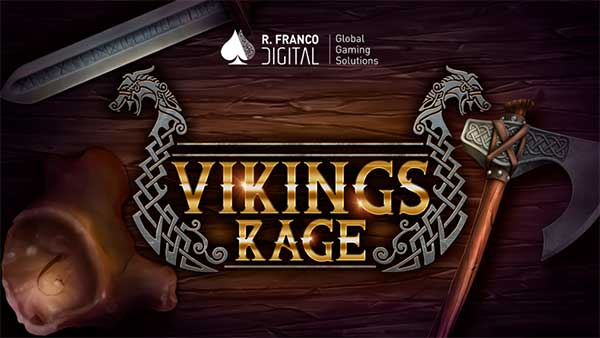 Spain’s leading gaming provider R. Franco Digital is taking players into battle with its latest game, Vikings Rage, a new online slot where only the strongest can emerge victorious.

Vikings Rage is a six-reel slot with a total of 200,704 prize lines and a Free Spins round that offers players even more chances for big wins.

A variable number of symbols can fall on each reel during each spin, up to eight, which greatly increases the number of lines.

A Wild symbol also features, which can appear on reels two, four and six, and replaces all symbols apart from the Scatter and Bonus symbols.

In addition, a Weapon Throwing bonus round can be triggered. This bonus consists of two phases: first, a weapon is randomly selected, with each weapon awarding different prizes.

Commenting on the launch, Mario Benito, Commercial Director of R. Franco Digital, said: “Vikings Rage is the latest in a long line of high-quality online slots that encompasses everything our players have come to expect from our games, offering memorable, engaging gaming experiences.

“We always aim to meet the high demands of our audience, and we have done just that with this exciting new title. We are sure it will prove a hit with our partners in the weeks to come.”

Vikings Rage is the latest addition to R. Franco Digital’s extensive games catalogue, which can be enjoyed by players across Colombian, Spanish, MGA and Curacao-licensed markets.