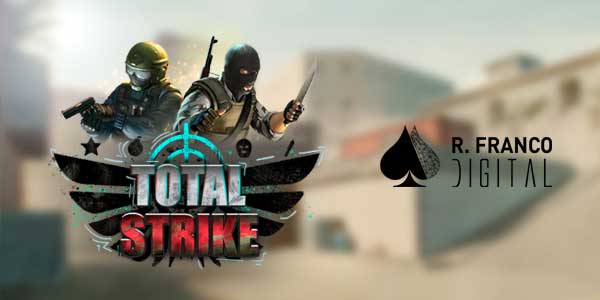 R. Franco Digital has laid down the gauntlet with Total Strike, a new online slot that see two sides collide in a thrilling battle.

In a slot that challenges bravery, Total Strike’s five rollers, three rows and 20 prize lines see players run the risk of deactivating the largest number of bombs without exploding them to achieve the best reward.

Snipers face one of the most important missions in the game: trying to fill in all their counters to reach the Wild symbol. Scatter symbols also feature, as well as a multi-level bonus game and a Free Spins phase.

When the Bonus symbol appears three times in the base game, the player gains access to the bomb defusing bonus where they are challenged to defuse different bombs to win a big prize. With three levels within the bonus, the maximum prize is 1,000 times the stake and for each bomb, the player must successfully opt to cut either the red or the blue wire.

During the Free Spins round, Sniper symbols accumulate to light up a skull. Once all the skulls for a symbol are complete, that symbol acts as a Wild and an extra Free Spin is added. On the spin following the completion of the skulls, the corresponding symbol will turn Wild each time it appears.

Total Strike is a high volatility game, with a maximum prize of 1,097 times the player’s stake. In certain jurisdictions, players can buy their way into the Free Spins round. This feature can be deactivated at the request of the operator.

“We are constantly raising the bar when it comes to game development, and the arrival of Total Strike sets a benchmark in the world of online slots.

“In developing this game, we have paid close attention to player feedback. We have been working and listening to our customers to make a complete slot adapted to new demands and trends, offering the best in leisure and entertainment, and we have achieved that.”

Total Strike is the latest addition to R. Franco Digital’s extensive games catalogue, which can be enjoyed by players across Colombian, Spanish, MGA and Curacao-licensed markets.