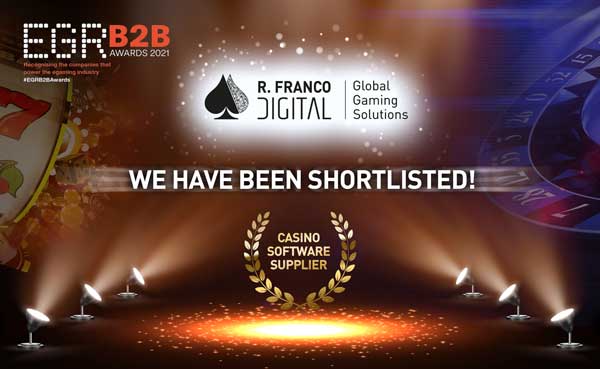 R. Franco Digital, R. Franco Group’s digital division, has been nominated for the fourth year running in the category of Casino Software Supplier in the upcoming EGR B2B Awards 2021.

The nomination sees R. Franco Digital take its place in one of the most prestigious events in the gaming industry worldwide, which recognises the achievements of major industry providers across betting and gaming software, networks, mobile devices, payments, recruitment, IT and infrastructure.

R. Franco gained its nomination after being selected by an independent jury of experts for Kolyseo, its MGA-licensed remote microservices-based gaming server. Kolyseo is integrated across BetPlay, BetConstruct brands, Casino Gran Madrid, Genesis and 12 other operators, in addition to three game aggregators.

This year, the EGR B2B Awards will have a hybrid format. Two days of virtual content on July 6 and 7 are paired with a face-to-face event on July 7 at London’s York Lawns in Regents Park, allowing the industry to congregate for the first time in nearly 18 months.

“Being nominated for the fourth consecutive year at the EGR B2B Awards is recognition of the great work that the fantastic, professional and human team that makes up this great family has been doing.

“It’s one more step on the journey towards our goal of becoming the leading provider of global gaming solutions for online and retail operators internationally.”