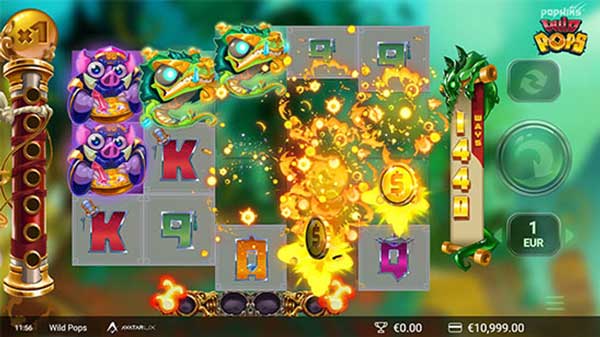 The ‘pays both ways’ slot utilises AvatarUX’s exciting PopWins™ mechanic, where winning symbols ‘pop’ and are replaced with two new symbols, something that can continue to expand for every cascading win on a single spin, offering great win potential.

A multiplier is added for every seventh Pop, meaning one spin can turn into huge wins if the Pops don’t stop and the reel grid continues to grow.

If three wins occur in a row, two random wilds are triggered, something that is repeated for every three consecutive wins, leading to even more Pops.

If the reels expand to seven columns high, the bonus round is triggered, and three extra lives are awarded to players. Where previously a non-win screen would end the multiplier, an extra life is consumed and a re-spin is awarded, while the multiplier remains throughout the duration of the spin.

Stuart McCarthy, Head of Partner Strategy and Sourcing at Yggdrasil, said: “WildPops™ is a fun-filled new addition to the Yggdrasil slot offering and will appeal to a wide demographic of players.

“Our YG Masters studios continue to push the boundaries of innovation and AvatarUX is no different with its fascinating graphics and thrilling PopWins™ mechanic which has proven very popular with players.”

Marcus Honney, Managing Director at AvatarUX, said: “Our latest PopWins™ game contains all the thrilling excitement of our feature mechanic with a fun theme and massive win potential. Any spin can get the Popping started and give players thrilling experiences.

“Our partnership with Yggdrasil continues to go from strength to strength and we look forward to it growing for many years.”

AvatarUX is an original partner studio of the YG Masters programme which allows independent studios to develop content on Yggdrasil’s platform and in partnership with the supplier. WildPops™ is AvatarUX’s third title launched through the partnership, following the successful release of PopRocks and Lilith’s Inferno.