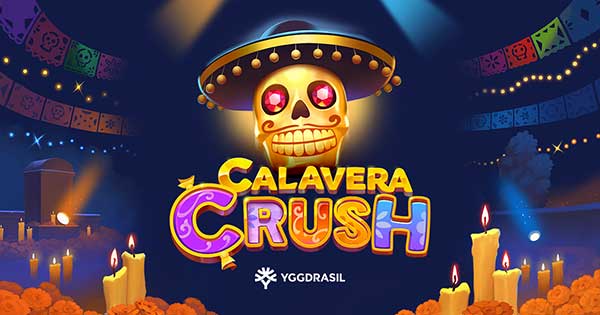 Players are invited to the biggest celebration of the year as Yggdrasil Gaming hosts the greatest Day of the Dead party ever seen in its latest release Calavera Crush.

Coupled with upbeat mariachi tunes, this spectacular slot boasts a host of inviting bonus features and mechanics including avalanches that see winning symbols removed, allowing for new ones to fill the empty space, and free spins with a potentially infinite win multiplier.

Whenever players register a winning spin, special wild symbols may land into the empty spaces on the game reels, randomly increasing a win multiplier by +1, +2 or +3. This win multiplier can climb dramatically in value and only resets when consecutive wins come to an end.

The real party begins whenever four or more scatter symbols land during base gameplay, kick-starting the free spins feature in which eight free spins are awarded. Before it starts, players are offered an opportunity to gamble their spins to win a maximum of 18 free spins.

Impatient partygoers can utilise a Golden Bet for 25% extra per spin, increasing the chance to trigger a bonus by x2. In certain jurisdictions, players can buy the bonus for instant free spins.

Stuart McCarthy, Head of Product and Programs at Yggdrasil, said: “This epic Day of the Dead-inspired release will have players going loco thanks to its thrilling features and memorable mechanics.

“Not only is Calavera Crush fantastically designed with great winning potential, but it has all the makings to become a real player favourite leading into spooky season!”