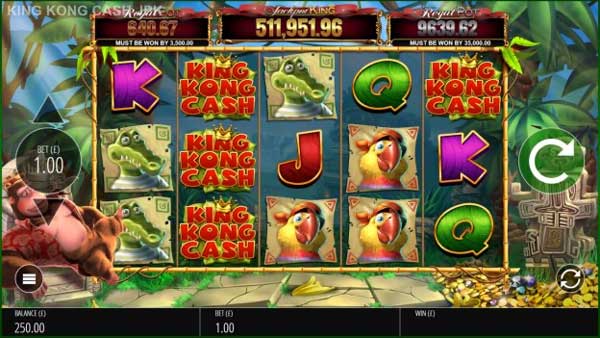 Blueprint Gaming’s iconic release King Kong Cash is back and better than ever after becoming the latest addition to the slot developer’s ever-growing Jackpot King series.

The hugely popular game, which was first launched in 2016, now has an extra layer of excitement to its classic gameplay, giving players the opportunity of triggering entry to the progressive jackpot system and win big from the Wheel King.

All the features from the original 5×3 slot remain, which is packed with bonus rounds and modifiers. Three or more Kong Bonus symbols activates one of five bonus games, including Golden Kong Free Spins, Empire Free Spins and King Kong Trail.

This latest addition follows strong demand from operators and players for the inclusion of the main Jackpot King prize and supporting ‘must be won by’ Regal and Royal pots, enabling the slot to reach a wider audience. Blueprint will continue to deliver more games to its Jackpot King suite, including the eagerly anticipated arrival of Sausage Party™ later this year.

Jo Purvis, Director of Marketing and Relationships at Blueprint Gaming, said: “The reel king has swung into the Jackpot King series, much to the delight of our operating partners and loyal fanbase.

“King Kong Cash has become a fans’ favourite ever since it was launched four years ago and the addition of the three huge cash pots is set to make this classic slot even more appealing to players who have missed its charms so far.”