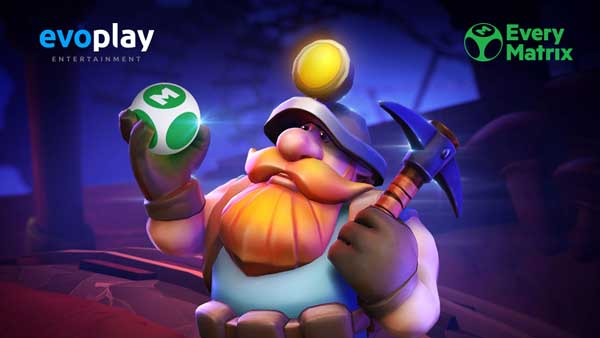 The industry-leading B2B software supplier will integrate the content developer’s award-winning portfolio of 100+ slots, table and instant games, which is set to go live across EveryMatrix’s extensive European client network in early February via a single integration with CasinoEngine, the iGaming Integration Platform.

Providing access to 11,500+ games from 175+ content providers, CasinoEngine is the industry’s largest content library and the go-to source for operators looking to renew their game offerings, get new content or enter new markets.
The new agreement provides CasinoEngine’s operators with access to smash hits such as Temple of Dead, Book of Keno and Treasure Mania, all deploying Evoplay Entertainment’s Spinential game engine, which accelerates download speeds by 10x to radically enhance gameplay quality.
The content studio has cemented its leading position in the instant games space, releasing a raft of premium quality titles that have already proved popular in a wide variety of regulated international markets.

Commenting on the deal, Vladimir Malakchi, CBDO at Evoplay Entertainment, said: “EveryMatrix is an established industry-leader that needs no introduction, so we are thrilled to sign with the company in a deal that’s testament to our forward-thinking approach.

“Armed with a high-tech product offering of unrivalled quality, we look forward to signing additional tier one agreements in the period to come.”

Amund Stensland, CasinoEngine COO at EveryMatrix, added: “Evoplay Entertainment’s unique game collection has proved hugely popular with a wide variety of demographics, performing particularly strongly with the emerging generation of player. The diversity of its superior product suite is especially appealing and we look forward to working with our new CasinoEngine partner.”

Evoplay Entertainment has won accolades from throughout the world of iGaming for the highly distinctive approach to game development it has consistently demonstrated since being founded in 2017.

As well as netting a wealth of SBC and EGR shortlists in 2020, the supplier has continued to expand its global footprint with new launches across the UK, Croatia, Malta, Bulgaria and Romania over the Christmas period.