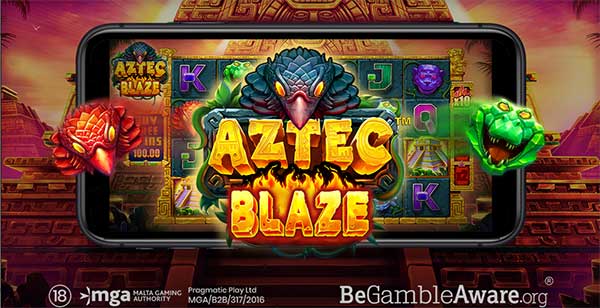 Pragmatic Play, a leading content provider to the iGaming industry, journeys to an ancient jungle empire in search of treasure in its latest slot release Aztec Blaze™.

Aztec Blaze™ is set across 6×4 reels and features symbols depicting various beasts including crocodiles, monkeys, and snakes which must form matching combinations across the title’s 25 paylines to award a win. These symbols are joined by a wild which substitutes all other symbols in game except the scatter.

Every time a win occurs, the next spin will see a larger symbol land on the reels, with the first win granting a colossal symbol upon the next go. These begin at 2×2 in size, and if they’re part of the next win, they increase in size up to a maximum of 4×4. Any wins landed thereafter award an incrementally increasing win multiplier worth up to a maximum of 10x. If a loss occurs, it resets back to no colossal symbols for the following spin.

Landing two scatter symbols awards the free spins round, where players are initially granted five lives with each non-winning spin reducing these lives by one until none remain. During the bonus, colossal symbols continue to fall, while any multipliers do not reset, but remain on the reels.

Aztec Blaze™ follows in the footsteps of recent hits such as Book of Golden Sands™, Striking Hot 5™ and Happy Hooves™ which reside amongst a collection of over 250 titles in Pragmatic Play’s award-winning games portfolio.

Irina Cornides, Chief Operating Officer at Pragmatic Play, said: “We’re giving the colossal symbol mechanic a boost in Aztec Blaze™, adding lives, multipliers and additional expansions to this feature will be a huge draw for players.

“We look to bring excitement to players in a variety of ways, and this super-high volatility hit combines a classic theme with bold gameplay, which is a hallmark of Pragmatic Play slots.”