Pragmatic Play ties up the year with Crystal Caverns Megaways™ 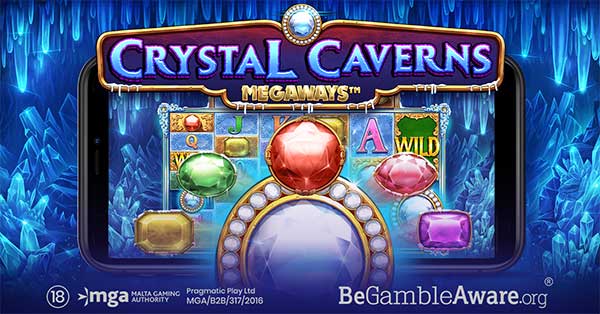 Serving as the provider’s final slot release of the year, the 6×7 Megaways™ title features golden Wild symbols that land on every reel except for the first and last and can replace all other symbols, other than the Scatter.

If a Wild symbol lands anywhere on the reels (with exception to the top row), it will expand, covering the entire reel, helping players create even more combinations!

A Tumble feature also makes up a big part of the gameplay, replacing all symbols that form part of a winning line with new ones. However, in this title, the Tumble feature comes with an unexpected twist: an increasing multiplier that is applied to the total win from the Tumble.

Scatter symbols not only pay out up to 100x the total bet, but they can also award a maximum of 20 Free Spins with a multiplier that increases with every tumble, providing players with multiplier madness as we fast approach the New Year.

Crystal Caverns Megaways™ arrives on the heels of recent release Smugglers Cove™, as well as festive hits Christmas Big Bass Bonanza™ and Santa’s Wonderland™, which reside amongst a collection of over 200 HTML5 titles in Pragmatic Play’s award-winning games portfolio.

Julian Jarvis, Chief Executive Officer at Pragmatic Play, said: “Crystal Caverns Megaways™ pairs high-volatility excitement with glorious visuals in an experience that will have players on the edge of their seats.

“We are delighted to be able to round off what has been a hugely successful year with one of our strongest slot titles, and cannot wait to see how players react to the unique gameplay.”