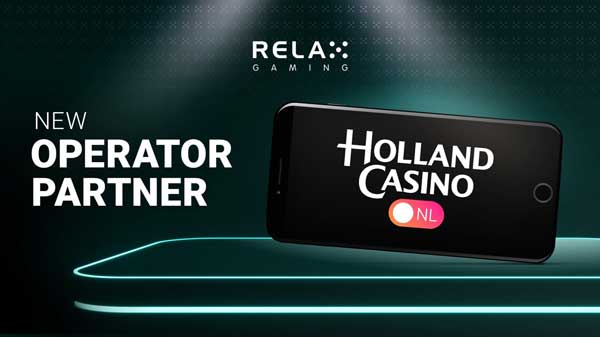 Relax Gaming, the igaming aggregator and supplier of unique content, is one of the first to offer its award-winning content in the Netherlands, partnering with leading operator, Holland Casino.

The state-owned gaming group, which operates 14 land-based casinos in the Netherlands, and was named in the first 10 casinos to receive their online licence approval, is expected to lead in the online space now its live following the October 1st regulatory deadline. Its players now benefit from Relax’s full range of proprietary titles, while ensuring the highest standards of safer and responsible gambling.

Holland Casino also gains access to an extensive variety of content from third-party suppliers, availing itself of content from hand-picked Silver Bullet and Powered by Relax partners.

The deal is set to pave the way for Relax and its partners in the Netherlands as the country regulates and will demonstrate the appeal of its diverse portfolio, which can cater for specific market requirements with ease.

The announcement forms part of a continuous stream of distribution agreements being established by Relax as the company accelerates its growth in key regulated markets.

Daniel Eskola, COO at Relax Gaming, said: “As one of the Netherland’s most popular casinos, it’s a fantastic advantage for us to be partnering with Holland Casino at this important juncture for the market and furthering the distribution of our proprietary and third-party games to new audiences.

“The collaboration is testament to both the quality and variety provided through our platform as we drive differentiation and we look forward to working closely with them to deliver a tailored offering that caters specifically to the Dutch market.”

Jeroen Verkroost, Digital Transformation Director at Holland Casino, said: “Relax’s reputation for business simplicity and efficient integration have made it a platform we have been eager to integrate with for quite some time. We have great expectations for this partnership and know our customers will be big fans of the range of engaging and market-specific online casino content that is already live.”

Now regarded as one of the industry’s leading aggregators, Relax Gaming provides its partners with upwards of 2,000 online casino games. This encompasses a wide range of titles, from its high performing proprietary slots to an expansive library of content from hand-picked third-party studios via its partnership programmes.

In tandem with its swiftly growing success, the leading supplier secured the award for Unique Gaming Company of the Year at the UK’s International Gaming Awards in September. This was preceded by four EGR B2B Awards in July, including Innovation in Mobile and Casino Software Provider as well as two CasinoBeats Developer Awards at the SBC Summit in Malta.