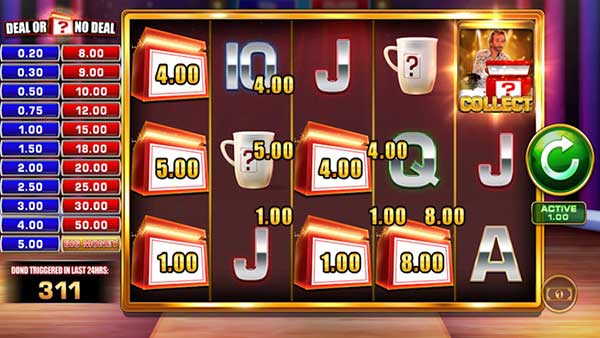 Blueprint Gaming has launched its first ever community-based slot with the release of Deal or No Deal™: Join & Spin, which is exclusively live with the developer’s long term operator customer Sky Betting & Gaming.

This innovative concept from Blueprint, now available across Sky Vegas and Sky Bingo, provides an immersive gameplay and encourages social play between friends, family members and the wider slot community to beat the banker.

During the base game, the reels spin automatically and players are required to place a bet to become active in the next spin. Any money and collect symbols in view awards a cash prize, granting players plenty of opportunities to win.

The bonus round is based on the iconic Deal or No Deal™ game that is commonly utilised within other Blueprint-developed titles inspired by the hit TV show. The key difference with this version is that all players active will join the round. The bonus feature continues until all players have dealt or at least one player plays to the end and reveals their box.

Should any player continue until the final round and reveal the Big Money logo in their box, the Big Money bonus feature is awarded to all players still active. The Deal or No Deal Studio evolves to show a set of reels, which spin for the chance to win further wins.

Jo Purvis, Director of Key Accounts and Marketing UK at Blueprint Gaming, said: “Bringing a multiplayer element to our Deal or No Deal™ games family delivers a unique gameplay that is very different to our previous releases.

“We see significant opportunities in developing community slots amid a growing interest from players for this type of content. Launching Deal or No Deal™: Join & Spin with our close friends at Sky Betting & Gaming is an exciting move and we’re hopeful the game will resonate with players.”

Philippa Ayres, Head of Content at Sky Betting & Gaming, said: “Blueprint’s quality range of Deal or No Deal™ branded games always grab the attention of players and this new community slot has certainly caught the eye of many individuals.

“The addition of Deal or No Deal™: Join & Spin further strengthens our offering with exciting content for players to experience. Early indications show that customers are enthusiastic about the multiplayer aspect of aiming to beat the banker together.”