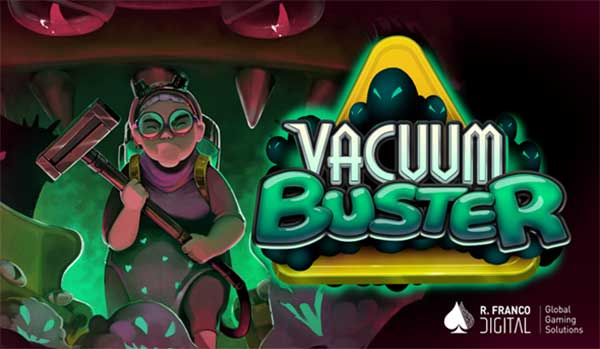 R. Franco Digital, Spain’s leading provider of gaming content, has launched Vacuum Buster, a title that tasks players with cleaning up a world of chaos and disorder made possible by evil sofas and fearsome fluff.

With help from a superheroine protagonist and her powerful vacuum cleaner, spotlessness will return in the studio’s latest slot.

Set across 5 reels and home to 20 paylines, R. Franco Digital has transformed the daily cleaning schedule into a feature-filled game.

Missing coins, leftover pizza and lost remote controls make up the high paying symbols with two distinct wilds being able to substitute any symbols in-game except the scatter. These reels can change position when both wilds are in play simultaneously, guaranteeing bigger prizes for the player and creating a wild reel on reel one.

To do this, players must grab a vacuum cleaner and start hunting for lint, attracting reels to the left and generating higher profits.

Three scatter symbols award 20 free spins which can also go on to be retriggered during play. Creating a wild reel during the free spins locks it into position throughout the remainder of the round and this is instrumental to unlocking Vacuum Buster’s full potential.

Commenting on the launch, Mario Benito, Commercial Director of R. Franco Digital, said: “Vacuum Buster carries a unique theme and exceptional graphics that will prove to be a hit with players who like a clean room everywhere! Its changeable reels mechanic and the potential for a sticky wild reel will keep players entertained and picking up their feather dusters long after release.”

“The R. Franco Digital team continues to work hard to deliver our partners and players the best gaming experience possible in Spain and beyond, and we are confident Vacuum Busters will exceed all expectations.”

R. Franco Digital continues to move forward with new developments and features that repeatedly prove to be successful both critically and commercially, Vacuum Buster can be enjoyed by players based in Colombian, Spanish and MGA-licensed markets.