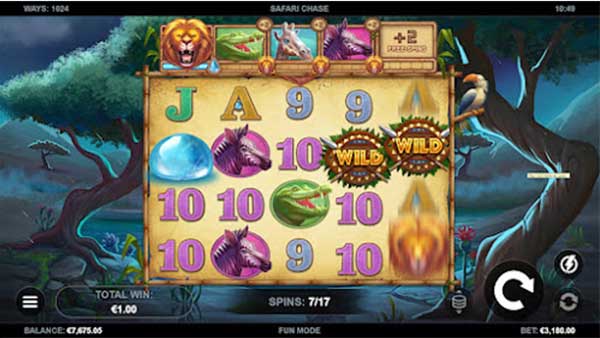 Innovative slot supplier Kalamba Games has donned its pith helmet and heads out onto the savannahs in search of big game and even bigger wins in its latest wildlife themed-slot, Safari Chase

The 5×4 reel action takes place against the backdrop of the majestic African plains and grasslands where players have the chance to chase maximum wins of 5000x their bet in a high volatility safari adventure like never before.
Lions, Zebras, Crocs and Giraffes inhabit the reels where hitting three or more bonus symbols in the base game takes players through to the wild Free Spins round where up to 15 extra free spins can be awarded.
Once there, accumulating the special water droplets upgrades the in-game symbols to Lions for some ferocious potential wins and, of course, the HyperBonus feature is available in participating regions to take adventurers straight to the action.
Safari Chase was the featured game in the latest Kalamba Invitational Tournament series, where one lucky winner recently took home an Apple iPad while four runners up scored themselves a special limited edition Kalamba Swag Box.

Alex Cohen, COO and Co-Founder of Kalamba Games said: “The exotic African setting of Safari Chase is the perfect theme for our latest feature-packed slot and the recent tournament was a huge success, where some of our valued partners sampled the wild gameplay and had real adventure chasing wins and enjoying the event.
“Safari Chase is now available to the wider network and we’re confident players are going to have a blast, embarking on their hunt for trophy animals among the exciting features.”