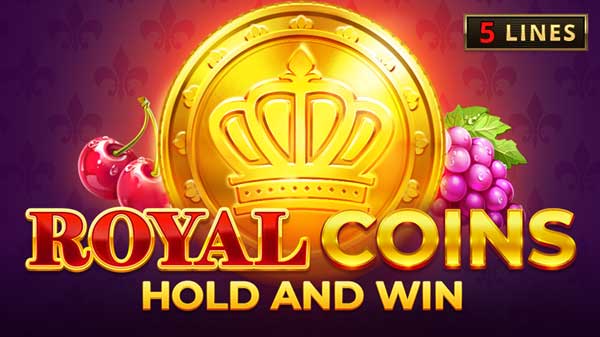 Casino games and software developer Playson has released Royal Coins: Hold and Win, a noble slot that invites players to an imperial adventure.

The 3×3 slot builds on the company’s immense Hold and Win collection, combining the popular mechanic with the classic gameplay commonly associated with titles within the Timeless Fruit Slots portfolio.

Red Sevens act as high paying Wilds during the gameplay, with coin symbols the jewel in the crown, triggering the Hold and Win Bonus Game when appearing in groups of three.

There are regular coins, Jackpot Coins and Collect Coins, which appear on the second reel in place of the others during the Bonus Game. Each one gathers values from all other visible coins on the game field, including Jackpot Coins, which disappear to free more space for the new coins. The title’s trio of jackpots range from Mini, which are worth x25, to Grand, worth x1000.

Playson’s portfolio of Hold and Win games have proven to be a big success with players who appreciate the technical brilliance and range of features these types of slots offer.

Vsevolod Lapin, Head of Product at Playson, said: “We’re delighted to unveil another addition to our Hold and Win range, a key component of our product offering that has never failed to impress our player base.

“With exclusive coins and a Royal Bonus feature, the latest title will not only extend the popularity of our Hold and Win titles but offer a new way of playing a classic.”